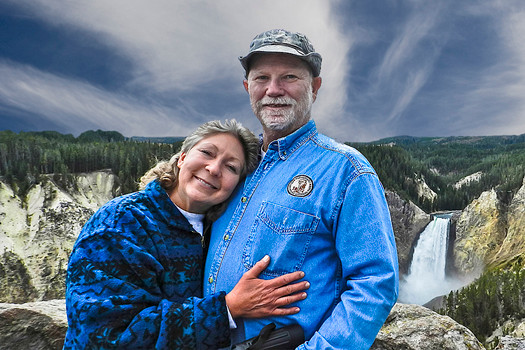 Leo Keeler was born in Bisbee, Arizona. He completed his first solo overnight backpacking trip at the age of 9 and began studying wildlife through the live capture of ground squirrels.

They met in 1988, and found their business evolved from sharing similar goals. Their mission: to provide quality, affordable images that inspire, entertain, educate and provide encouragement to conserve and protect our world and its creatures.

Their work has been featured in a national ad campaign that was published in National Geographic, Smithsonian, Newsweek, Life, Sports Illustrated, Field and Stream, TV Guide, People and Alaska Magazine, as well as the Wall Street Journal, The New York Times and The Washington Post.

They have served as wildlife consultants for several filmmakers in Denali National Park and been featured on "Men's Journal," produced for ESPN, "Living Dangerously," produced for BBC, and "Alaska - Walk on the Wild Side," produced for the Travel Channel and aired nationwide for over six years.

The Keelers were leaders of the private, non-profit group Friends of McNeil River for 10 years, dedicated to protecting the world famous McNeil River brown bears. They were instrumental in establishing the 160,000 acre McNeil River State Game Refuge. In 1995 the Keelers were featured on CBS News' "Eye on America" with John Blackstone twice when they led a drive to thwart a bear hunt in the refuge by encouraging people to apply for a permit and stay home if their names were drawn. It worked. Six of the eight permits were awarded to people who had applied for a hunting permit to save a bear's life. The Keelers later led the effort that closed the refuge to brown bear hunting.

The Keelers assisted Defenders of Wildlife, The Alaska Wildlife Alliance, and Friends of Animals in protecting the famed Toklat wolf pack in Denali National Park. The Toklat wolves were one of the most famous, most viewed, most photographed, and the first and longest studied group of wild wolves in the world. On November 2, 1999, CBS Evening News with John Blackstone featured the Keelers and the Toklat wolves in a special segment of "Eye on America." If you'd like to see it click here.

On February 3, 2000, the Keelers received the Ginny Hill Wood Award from The Alaska Wilderness Recreation & Tourism Association for their photographic contributions to the wildlife conservation efforts in Alaska.

Dorothy Keeler's successful account of creating a petition to protect the Toklat wolves of Denali National Park is the lead story in MoveOn.org's book entitled, "MOVEON'S 50 WAYS TO LOVE YOUR COUNTRY: How to Find Your Political Voice and Be a Catalyst for Change."

In October, 2005, the Keelers were given the honor of being selected as two of the 40 founding members of the International League of Conservation Photographers. The ILCP was initially founded with 40 Fellows considered to be some of the most talented and passionate nature and wildlife photographers of our generation. The mission of the ILCP is to further environmental and cultural conservation through photography and work on global campaigns to highlight current issues.

The Keeler's images were included in the 40 image photography exhibit, Irreplaceable – Wildlife in a Warming World, that toured the United States for years and was sponsored by Earthjustice, Conservation International, and the Noah Alliance. Click here and here to see their images.

Their first Kickstarter Project, Milkweed for Monarchs Butterfly Garden, was launched as a symbol of hope on September 11th, 2012. This was their first step to help restore monarch butterflies across the country.

Did you know that Monarch butterfly numbers have crashed over the last 20 years, and they are being considered for the endangered species list? In the last three years, the Keelers have Rescued, Raised, and Released over 500 Monarchs and taught hundreds of kids of all ages how they can help save Monarchs, too. They have given dozens of PowerPoint presentations and hosted "Monarch Egg Hunts," "Coming Out Parties," and "Tag and Release" events.

The Keelers have recently started a new venture to help raise awareness. The Monarch Garden Inn is a vacation rental where guests can learn how to Rescue, Raise, and Release Monarch butterflies in the morning and visit Yellowstone National Park in the afternoon! Click here for details